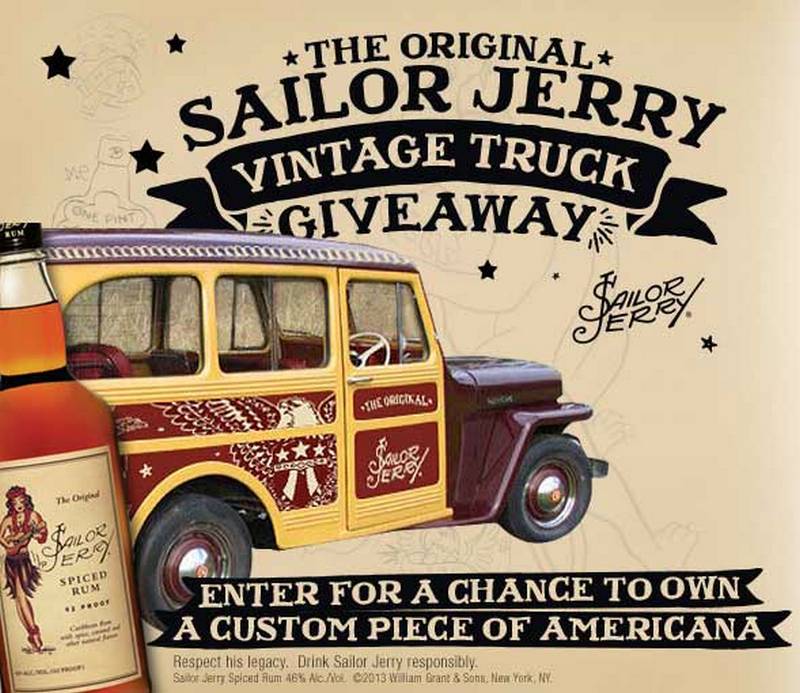 “We always make a stop at the Hampton I-95 Liquor & Wine Outlet to stretch our legs, let the dogs out for a break and take advantage of the low prices and great selection available in New Hampshire,” said Christensen. “When I entered the contest I had no expectation of winning because I honestly never win anything. I was absolutely speechless when I found out. Who wins a car, let alone a vintage, cool vehicle that you have coveted for years?”

The Sailor Jerry Rum Summer Promotion generated thousands of entries and the winner was selected on what would have been Norman “Sailor Jerry” Collins’ 103rd birthday. The grand prize custom Sailor Jerry 1948 Jeep Willys Overland Wagon is a true American classic modeled after one of the first steel bodied wagons produced after World War II. The “Tin Woody” has an original drive train with an approximate retail value of $15,000.
Christensen is known in his small Long Island community as the ‘orange Jeep guy’ because of the modified and highly visible bright orange Jeep Wrangler parked outside of his small dental practice. A long-time Jeep enthusiast, he has owned several Jeep vehicles and always wanted to buy and restore a Willy. The orange Jeep has attracted several patients and he anticipates the site of the Sailor Jerry Jeep Willy will do the same.
“Last year 7.3 million customers from across state and around the nation shopped at our 77 NH Liquor & Wine Outlets,” said NHLC Chairman Joseph W. Mollica. “Eric is an excellent example of the type of consumer we see
throughout the year. He and his family pass through multiple states knowing that New Hampshire is one of the most convenient, affordable places to purchase wine and spirits in the country. We are so pleased to collaborate with Sailor Jerry Rum to offer this fantastic prize to our customers.”

Norman “Sailor Jerry” Collins (1911–1973) is the father of old-school tattooing and considered by many to be the foremost tattoo artist of all time. He developed his craft in a time and place where hard work and sacrifice were deeply valued. Sailor Jerry tattooed thousands of the military men who passed through Hawaii, playing a prominent role in shaping US military culture in the Pacific Theater during World War II.
A small mom and pop clothing company was founded by fans of Sailor Jerry to keep his legacy alive and out of the ambition to create something as iconic and enduring as Sailor Jerry’s artistic legacy, Sailor Jerry Rum was created based on the spiced rums created and drank by sailors (to improve the taste of on-board rum rations, sailors would spice it with ingredients from the ship’s galley). Sailor Jerry continues to thrive as a lifestyle brand with an ever increasing base of loyal fans and advocates.
“My brother-in-law still doesn’t believe I won the Jeep Willy,” said Christensen. “I can’t wait to send him a photo of me in the driver’s seat!”