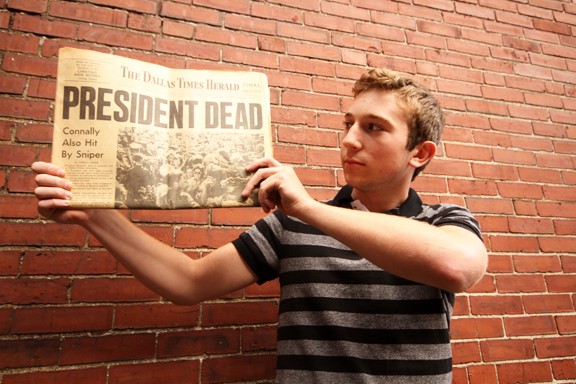 Posted at 23:10h in Gallery Exhibitions, News by tim

As the nation prepares to observe the 50th anniversary of President John F. Kennedy’s assassination in November, a local high school student is preparing an exhibit that asks a number of questions regarding the reported facts about the events of that day.

The exhibit will open at Motorland Vintage America, located at the North Dam Mill in Biddeford, on Friday, Oct. 25, at 5 p.m. during the monthly Biddeford+Saco ArtWalk.According to Caleb Delano, a 15-year-old, home-schooled freshman from Waterboro, the U.S. government should re-open the case into Kennedy’s assassination on Nov. 22, 1963.

Delano recently began an internship at Motorland Vintage America, where he has been researching the assassination and discovering unanswered questions about what really happened in Dallas on Nov. 22, 1963.

“I have grown up believing that Lee Harvey Oswald was the lone gunman that dark day 50 years ago,” Delano said, “but after reviewing the reports and theories in depth, I have to admit I’m not so sure the case is closed.”

This is the second year that Motorland Vintage America has offered internships to local high school students interested in history, art or automotive studies who want real-world experience in their particular field of study.

Delano is designing a special memorial exhibit that will combine period artifacts with social media to remember and honor the slain president and encourage a new generation to form their own opinions on whether the case is closed or whether there is reasonable doubt.

“I am a big history buff,” Delano said, “and I am excited to have the opportunity to look into the details of (the assassination) when the world was changed forever.”

Delano has worked with the owner of Motorland Vintage America, Tim Stentiford, to catalog more than 200 vintage documents, newspapers, magazines and books from the Motorland collection, which were all written at the time of the assassination.

“Most Americans believe the U.S. government’s conclusion, published by the Warren Commission, that Oswald acted alone,” Delano said. “But to be honest, when you start digging, you discover key witnesses never interviewed along with investigators and experts who pieced together compelling theories that never got their day in court.”

He added, “I think we owe it to the late President Kennedy, his family and to students sitting in history classes today, to have a fresh examination of the case. My goal for the ArtWalk exhibition is to get people, young and old, to start talking again about what really happened 50 years ago in Dallas. I don’t have the answers, but I do believe that social media and a new generation may shed some new light on one of America’s darkest days.”